Berkshire Hathaway lost 1.1b from sales of shares between March and April

According to SEC filings, the fund lost $750M on Goldman Sachs $145M on Southwest Airlines, $124M on Delta Airlines, $45M on American Airlines and $80M on United Airlines by anticipating the liquidation of the assets.

On the 2nd of May, Warren Buffet announced that his company Berkshire Hathaway Inc. sold all its shares in four major US Airlines. These sales took place at different dates between the 7th and 21st of April 2020. The 13F filing for March also shows that the fund sold 84% of its shares in Goldman Sachs.

Notwithstanding these sales, the fund lost hefty amounts relatively to the beginning of the year: -46% on Southwest Airlines, -61% on Delta Airlines, -66% on American Airlines Group and -72% on United Airlines.

Below we show the cash generated from the sales of these 5 stocks that took place between March and April in blue, the stock’s value if they would have been kept in the portfolio in green and the loss of having sold these shares (as of May 22nd 2020) in red. 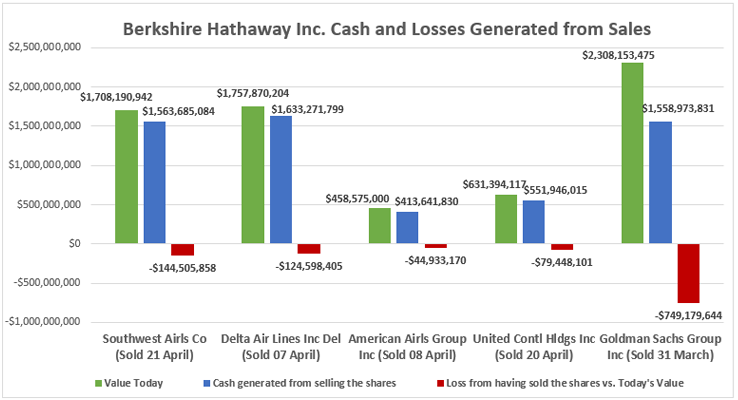 Berkshire Hathaway Inc. (NYSE: BRK.A) has suffered the impact of some inefficient decisions on the stock market where from March 16th 2020 to May 22nd 2020, the stock has underperformed the S&P500 by-25.46%.

AlternativeSoft is an award-winning quantitative analytics software specialising in asset selection, portfolio construction and customised reporting. To find out more sbout how the above informtion was extracted from our software or register for a free demo, get in touch with us today.